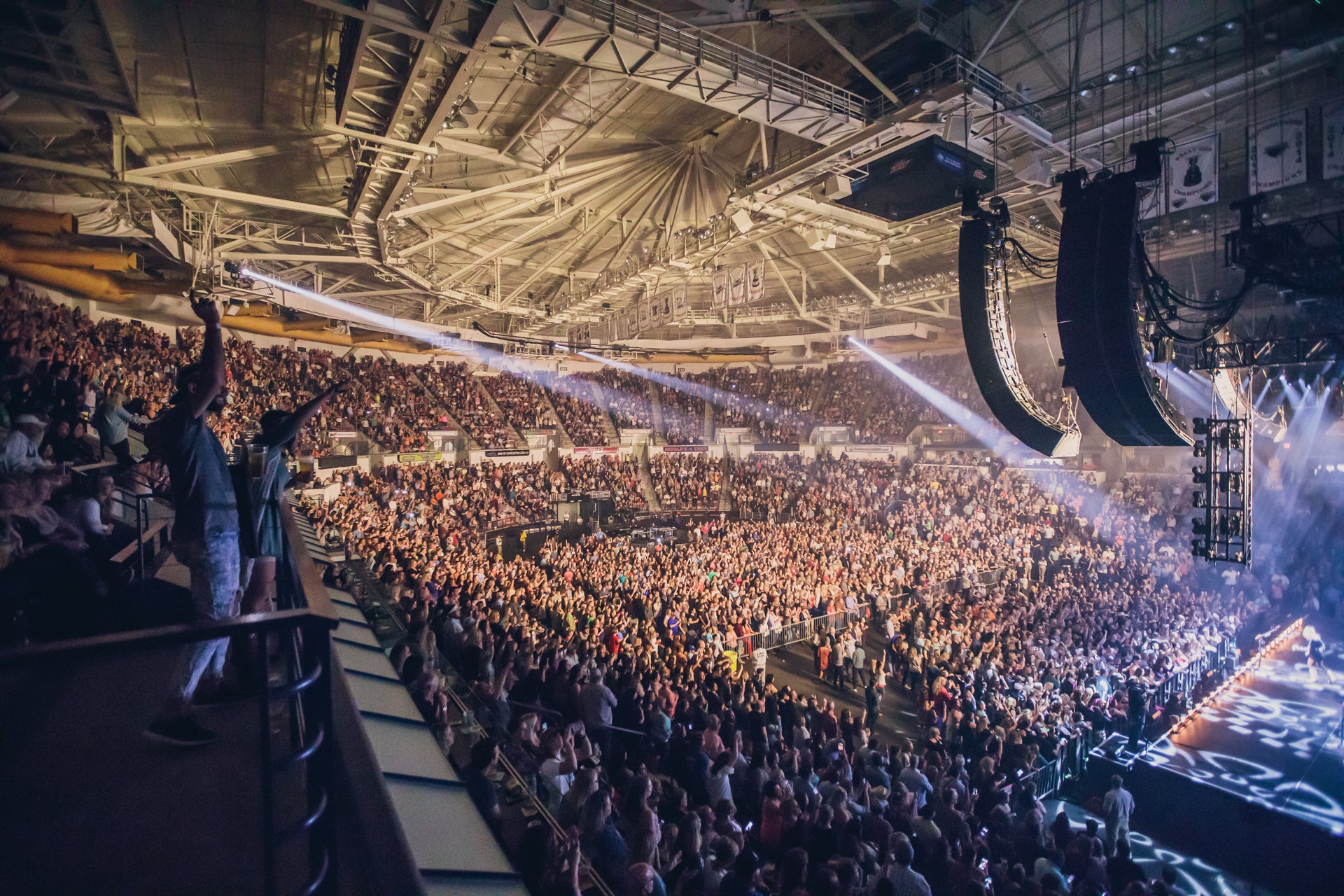 On January 29, 1993, the Lowcountry entertainment scene changed forever. On this date, the North Charleston Coliseum opened its doors for the first time. The show was World Figure Skating Champions featuring Olympic champions Elizabeth Manley and Marina Klimova & Sergio Ponomarenko.  The next night, country music superstars Alan Jackson and Lorrie Morgan took the stage for the first concert in the Coliseum. Both shows had capacity crowds and the Lowcountry finally had a world class entertainment venue. In the years following, the biggest names in music and entertainment would make North Charleston a regular stop on their world tours.

On October 23 of 1993, the South Carolina Stingrays played their first game in the Coliseum. The ECHL hockey team has called the North Charleston Coliseum home for twenty-five years. During this time they have played nearly 900 home games, won the Kelly Cup Championship three times (1997, 2001 and 2009) and won the hearts of all Lowcountry hockey fans.

With the incredible success of the Coliseum, the City of North Charleston opened the North Charleston Performing Arts Center and Charleston Area Convention Center adjacent to the Coliseum in 1999. The three venues, along with the Embassy Suites by Hilton Hotel, are located on the Bourne-Summey City Center Complex and host hundreds of public and private events each year.

“From South Carolina Stingrays hockey to the biggest concerts to family shows to graduations, the Coliseum has provided lifelong memories for so many citizens in our community” said North Charleston Mayor Keith Summey. “I thank the people of the Lowcountry for their support of the North Charleston Coliseum. We will continue bringing the best entertainment in the world, so that everyone enjoys the next twenty-five years as well.”

When asked about his favorite shows, Mayor Summey mentioned the Neil Diamond and Elton John concerts. “I think Neil Diamond’s music touches so many people and Elton John is just one of the greatest performers I have ever seen. We’ve had so many wonderful shows over the years but those two are very special.”

“The North Charleston Coliseum is more than a building,” said Frank Lapsley, General Manager. “It is a special gathering place that belongs to the people of the Lowcountry. A place where our community has made memories for a quarter century. Singing, dancing, cheering on the Stingrays, watching our kids graduate – we have so many special memories inside the Coliseum.”

The Coliseum shows no sign of slowing down as the 2018 calendar is already filling up.  Upcoming shows include The Wonderful World of Disney on Ice February 8-11, country music star Brantley Gilbert on February 17, the CAA Basketball Tournament March 3-5 and Harlem Globetrotters on March 24.  Several major concerts have been recently announced for later this year including Jimmy Buffet on April 6, REO Speedwagon and Styx on April 15, James Taylor and Bonnie Raitt on May 15 and Alan Jackson on September 14.  The South Carolina Stingrays have home games on January 26, 27, 28 and 30. Tickets for all events are on sale now at the North Charleston Coliseum Advance Ticket Office or online at Ticketmaster.com.

“If you think the first twenty-five years were great, just wait until you see the next twenty-five!” exclaimed Lapsley. He promised several major concerts will be announced in the near future.

Throughout 2018, the Coliseum will celebrate special memories and fun facts from the last twenty-five years with a “This Day in Coliseum History” social media promotion. The public is encouraged to share their favorite memories as well. The Coliseum Facebook page is located at www.Facebook.com/NorthCharlestonColiseumandPerformingArtsCenter. The Coliseum Twitter and Instagram handle is @NChasColiseum. The hashtag for the promotion is #NCC25.